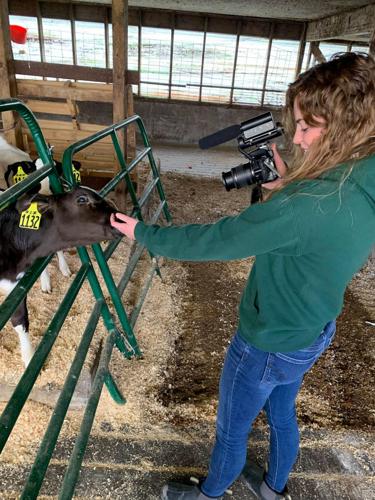 Though Jenne Hull grew up on a dairy farm in Franklin, Vermont, it wasn't until she went to college that she truly understood the pressures of farming.

"I saw the financial aid I would get because of how bad milk prices were," Hull reflected. "It was the first time I saw how much the farm made and lost each year; it was eye-opening that the dips can last so long."

She says that's a big reason she started 'Follow a Farmer' in 2019. Through videos she posts on social media, Hull tells the stories of Vermont dairy farmers; so they don't have to.

"They're already mechanics, soil experts and invested in so many other things that pertain to their business," Hull said, "to be told that you also need to share your story all the time, market what you're doing, and be transparent...that’s just frustrating, and I totally get that. The idea of 'Follow a Farmer' is we’ll do it for you. You don’t need to start anything; there’s already a ton on your plate, and I want to be an option for you to get your voice heard."

Hull, who moved back to Vermont from Colorado in 2020, was also motivated by the negativity she saw in the news media about dairy farmers. She originally set the ambitious goal to show another side of the story by documenting every dairy farm in Vermont.

"With so many farms going out of business, I thought it would be so cool if there was a video reference that they could have about how things are right now and the story of their farm...something that they could point to or hold onto," Hull said.

One of her favorite projects is about the Wiabels, a dairy farm family that immigrated from the Swiss Alps to Berkshire to own and operate Brouillette Farms.

"We sat down with the family photo album and there was so much to dive into," Hull said with a contagious sense of excitement and purpose.

Ultimately, Hull realized she couldn't visit every farm and would need to focus her time and efforts to make the biggest impact. At the onset, all of her videos were made as a passion project with her time donated.

In 2020, she received her first grant from Vermont Breakfast on the Farm to create 'Follow a Farmer' videos. This year she is working with funding from the Vermont Dairy Producers Alliance, Vermont Dairy Promotion Council, and Vermont Farm Bureau.

"A lot of my work is sponsored now and there’s more flexibility in the sponsorship because everybody has the same goal; let's rally behind farmers," Hull said.

Projects in the works for Vermont Farm Bureau include a video about environmental stewardship with farmers Larry Gervais of the Gervais Family Farm in Enosburg and Alex Thibault of Thibault Dairy Farm in Colchester, and another featuring the farmers of Lamoille County for Lamoille County Field days.

"I didn’t know a lot of things about farming and I grew up on a farm…I knew nothing about cover crops. If I can’t answer those questions then I don’t think people driving by have any idea either," Hull said of the value she sees in the videos she's working on.

Hull is also working on a video project with the Vermont Cattleman's Co-op; a start-up aimed at helping dairy farmers diversify to create a more cohesive beef industry in Vermont.

Hull who also works as a teacher will be teaching ag science, chemistry, and physics at Richford High School this fall, and says it's her ultimate goal to split her time equally between teaching and video production.

"If you are a farmer that has something you want to share; then I could be an avenue for that," Hull said. "I genuinely want to be a voice for farmers."